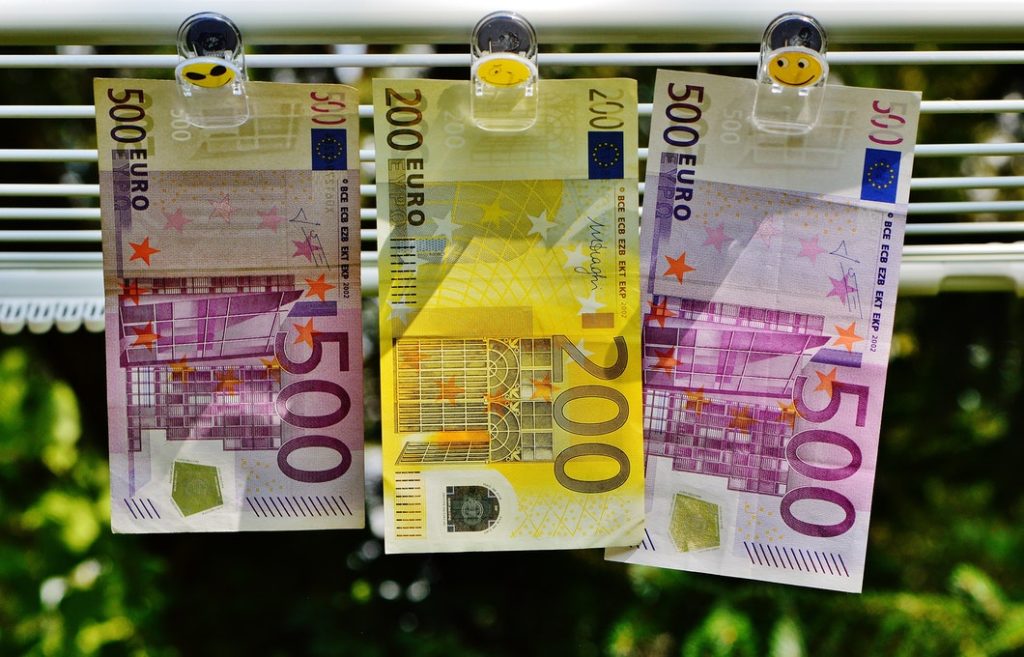 Money laundering is legally defined as transferring illegally obtained money through legitimate people or accounts so that its original source cannot be traced.

The International Monetary Fund (IMF) estimated in December, 2018 the criminal proceeds laundered annually between 2 and 5 percent of global GDP, or $1.6 to $4 trillion a year. The profits of money laundering are often used to finance crimes, including terrorism, human trafficking, drug trafficking, and illegal arms sales.

The introduction of AI for AML purposes enhances and facilitates the overall decision-making process, whilst remaining compliant with policies such as GDPR. AI can help to minimize the number of transactions falsely labeled as suspicious, achieve a demonstrable quality of compliance with regulatory expectations and improve the productivity of the operational resources.

Money laundering schemes can be broken down into three phases: placement, layering and integration.

AI approaches may be applied to identify money laundering activities in each of these phases. Common machine learning methods such as support vector machines (SVMs) and random forest (RF) can be used to classify fraud transactions, using large, annotated bank datasets. These data-driven approaches are normally used for the placement and layering phases because the transaction data is monitored by the bank. The final phase of integration is difficult to detect because funds have already passed fraud-detection mechanisms.

At present, the typical AML frameworks can be decomposed into four layers.

The Many AI Approaches You Can Take to AML

From our own experience with these kind of projects, we have realized one of the most efficient approaches to identifying money laundering is to define a linked knowledge graph over entities. Entity recognition is a set of algorithms capable of recognizing relevant entities (e.g., persons, positions, and companies) mentioned in an input text string. Relation extraction detects the relationship between two named entity nouns (e1, e2) in a given sentence—typically expressed as a triplet [e1, r, e2], where “r” is a relationship between e1 and e2.

Entity resolution determines whether references to mentioned entities in various records and documents refer to the same or different entities. For example, the same person can be mentioned in different ways, and an organization could have different addresses.

Sentiment analysis can be useful for AML by shortening the investigation period of a compliance officer. It can be applied at different levels of representation, including backlog management, client onboarding and client profile-monitoring stages.

In this context, the goal of a sentiment analysis system is to monitor sentiment trends associated with a client to identify important patterns. When AML investigators identify a company that has potentially been involved in a suspicious transaction, they generally consult the Internet for evidence.

Analyzing sentiment levels from news articles concerning a specific organization can reveal meaningful insight in support of AML procedures. AI-based sentiment analysis can screen thousands of articles in seconds, significantly improving the efficiency and accuracy of the investigation process.

Sentiment analysis can also be used in client profile-monitoring and onboarding processes to research and identify specific pain points of a client and their associations with negative articles. In terms of AI, numerous different techniques have been used for sentiment analysis, including SVM, conditional random fields, and deep neural networks such as CNNs and RNNs.

At expert.ai, we believe the effectiveness of an AI system is contingent upon its ability to explain a specific decision that it made or predicted. The nature of explanation varies according to differences in data and algorithms and, unfortunately, there remains no common or standard framework of explanation.

Communication with analysts is of utmost importance when designing any AML system, because users make the final decision. Explainable AI solutions, such as the expert.ai Platform, operate by providing users with clear information on why a prediction was made (e.g., why the system believes a transaction is suspicious) to assist users in making a decision and furthering their understanding of the technology.

It is important that any system can explain its decisions in a user-friendly way. European policy and GDPR regulations emphasize the need for financial institutions to provide explainable and human-authorized decisions. Thus, it is critical that any future AML method incorporates a human analyst and ensures that the analyst clearly understands the information presented to him or her. A black-box system that labels a transaction as “fraudulent” with no further insight is unacceptable.

AML systems should be cyclical, rather than linear, in which automated methods communicate with and learn from the analysts. In this future communal working environment, a final decision made by the human (who may or may not support the system prediction) is then back-propagated to the system to improve its decision-making capabilities. Only through this joint effort of humans and artificial intelligence can AML procedures achieve true success.

Join the Early Access Program for the Expert.ai Platform

Be among the first to leverage the new expert.ai Platform. Updates coming soon!

Why Financial Services Rely on NLU to Streamline Operations

How Intelligent Automation Is Redefining the Banking Industry